It's not all about the posts

This page is a haven for the maligned, unwanted and downright lowlife in a garden. But there's a twist. In a valiant attempt to find beauty in even the common pest I'm looking for you to send me your pictures of weeds, bugs and garden junk for display...

Email Thehaplessgardener@gmail.com and if you can include a little tale that would be great. 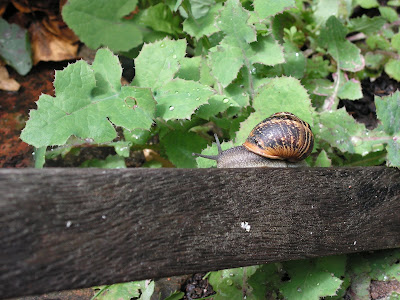 
A big thank you to @foxglovelane for sending through these shameless rogues. Exhibitionists, nymphomaniacs, or just having good old animal fun? Who cares, the beauty of bugs captured following a patient summer long wait to catch these creatures at it, to prove they live up to their name "bonking beetles" Brilliant. 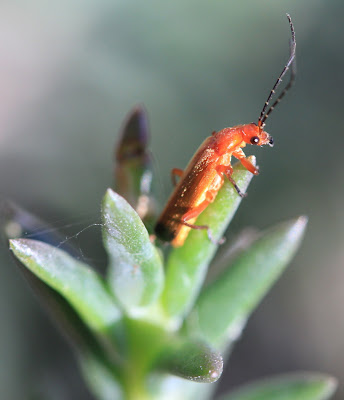 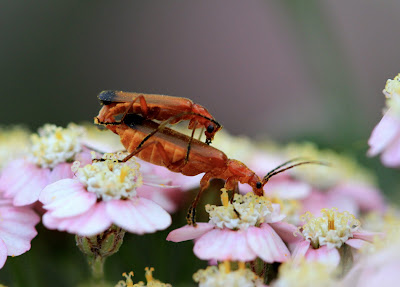 With kind permission of 'Esther' (do check out her blogs, beautifully written), here is the deceptively enchanting product of burrowed snails that have clearly spent a bit too long taking notes from the beetles above. 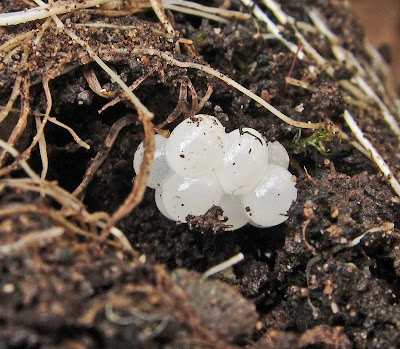 With many thanks to @LucyCorrander for this posturing beast. I can't help but draw comparisons with world leaders, or despots and their militia who upon sight of a camera reveal their violent armoury as a statement of power. And some find beauty in power. 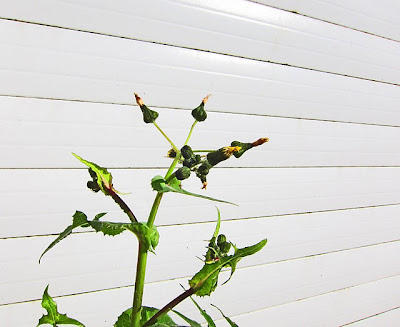 In Mog we trust

Now, I've already documented my position on cats, and there is no doubt that they show no respect for your endeavours, and parade around as though it's their birthright. But not all cats are from Chipping Norton, and all the way from Edinburgh is an original loveable rogue. One of my favourite tweeters, @zizapiz sent me a host of pictures to show me that cats and gardeners really should settle their differences. Same could not be said for her snail pic, which I've censored from this particular gallery...

Introducing Field Horsetail, the scourge of Leslie (@MissilePanda)'s life. I could feel the distress caused by this harmless looking thing just by her words. "Dreaded", "Hours picking" "Bugger" "comes back". But still she has managed to capture a young innocence in the emergence of shoots of green among dusty-brown stones as if it unwittingly popped up there - "who me?" We're on to you Mr Horsetail, but we'll let you off this once. 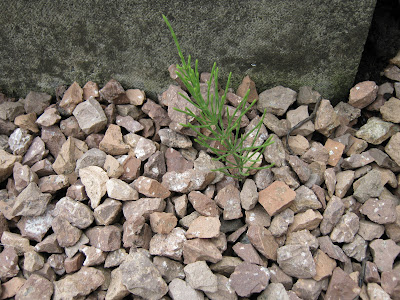 
Now, some of you may think this shocking BUT I must remind you that this gallery is dedicated to showing all manner of things that ruin our carefully planned, hard fought growing ambitions. Yet it is also there to challenge our anger, annoyance and sense of righteousness about the land we sow in and reap from by highlighting beauty. And there is no greater pest than a human, nor anything more beautiful than one of our own. Introducing my little nephew Max, and his plundered tomato bounty (thank you to my sister in law Lucy for the 'nomination'): 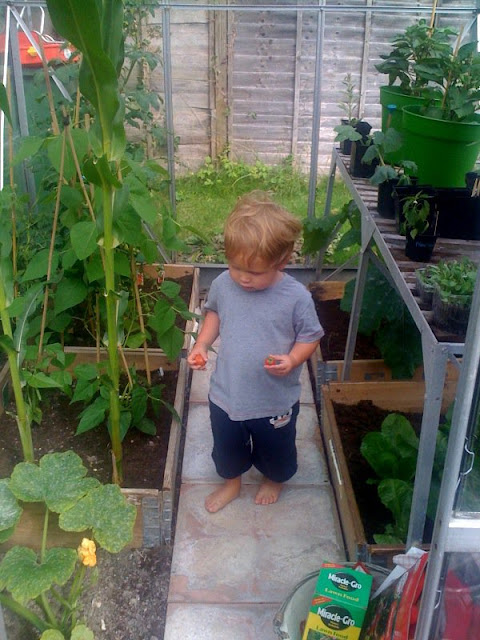 This next pic may put some of you off this page and indeed this blog for life. I hope not. But in the words of my dear friend @flamingokatie: "This little rogue is the scariest of them all.  You can be merrily weeding when out of nowhere this eight legged, six eyed monster appears form nowhere and at lightning speed! Truly awful."   Six eyes Kat? Really? This picture reminds me of ribbon acrobats who twist and turn on threads of silk for our amazement (though never falling off for our amusement). For all their inherent evil, spiders webs remain one of more astounding expressions in nature. 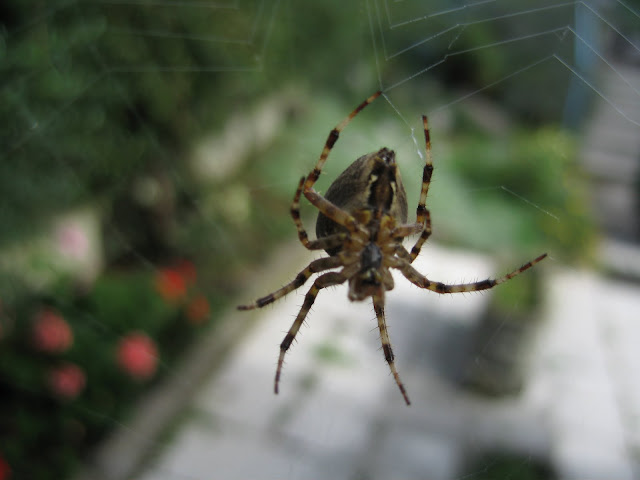 Remains of the clay


This photo is fantastic. It's here that beauty lies. Nowhere else though. I've just looked into my heart and seen a dark spot, a little kernal of bad if you will. Because this next picture actually made me laugh and feel a teeny bit of 'hah take that pigeon'. I know it's very very wrong and my RSPB friends will probably disown me (although would you defend a pigeon in court? No, and neither should they out of court). For more pigeon rage, check out the Battle of Bristol and the 'When pigeons attack series in June on the main blog. But for now witness the aftermath of carnage seen through the eyes of my friend Emma of weed photography fame: 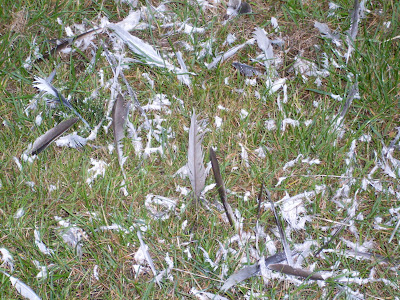 
Gardening can often be a solitary task, which is why we put so much hope and trust in anything that helps us out. Some of us even become attached to such things, as I have with my gloves. At the height of the growing season, more than anything we need our tools to come good, to justify our faith in them. When they do, well it's bond of strength that you feel can't be broken. Which is why I'm sad to report not just one, but two scandals rocking Oregon right now. The first, a tale of a good tool turned bad, fallen in with the wrong crowd and in desperation has ended up hurting those closest to it. The second, well, when you catch your hose getting kinky after it had promised those days were behind it you know it's time to move on and get a watering can. Thankfully, @LinnieW seems to be holding up well and her blog shows gardening of much promise across the Atlantic and is well worth following. 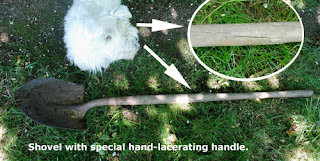 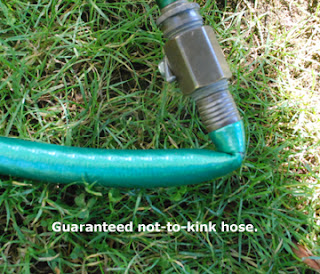 
What you are about to see is nothing other than the front line in the war against slugs. Nicole from @TheDigIssue on Twitter has just sent these pictures following a brutal episode out in the garden. There can be, some say, a poignant beauty in the darkest fights between good and evil - where you have to believe that there can be redemption for every living soul and it's what you are fighting for whether it's saving the strawberry from the slug, or saving the slug from itself. Or failing that the joy of knowing evil slimy beasts will burn in hell. But before you reach the final moment of peace, you have to go through this: 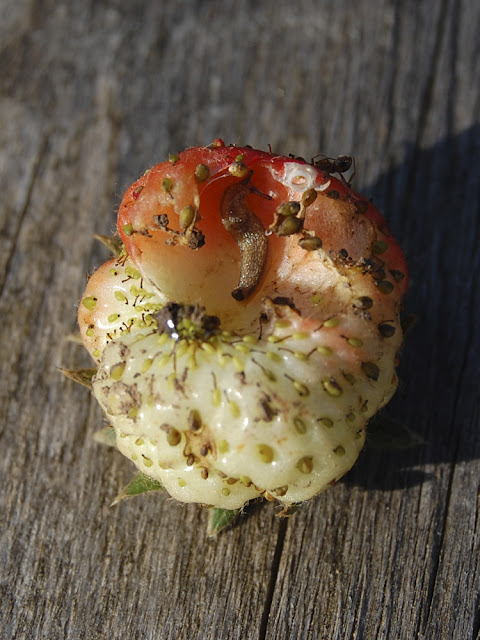 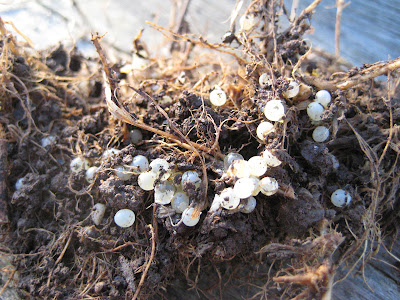 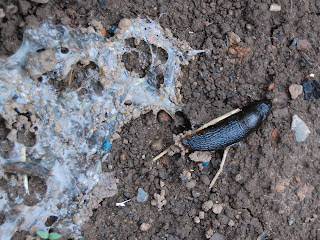 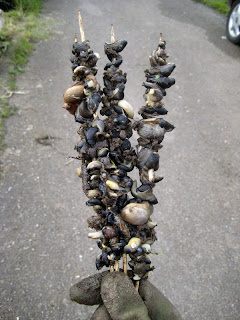 
And just when you thought it was safe to go out fire up the barbeque and lay down the kebabs...like the end of a Batman film, where the next crazy villain is revealed, battle weary Nicole had to face up to...BINDWEED... oh yes, this deceptive beast creeps through the undergrowth, targeting its victims and in a python-like movement slowly draws the helpless flower to its bosom for almost certain death. Don't allow its pretty white flowers to fool you, this could well be the femme fatale of the plant world. 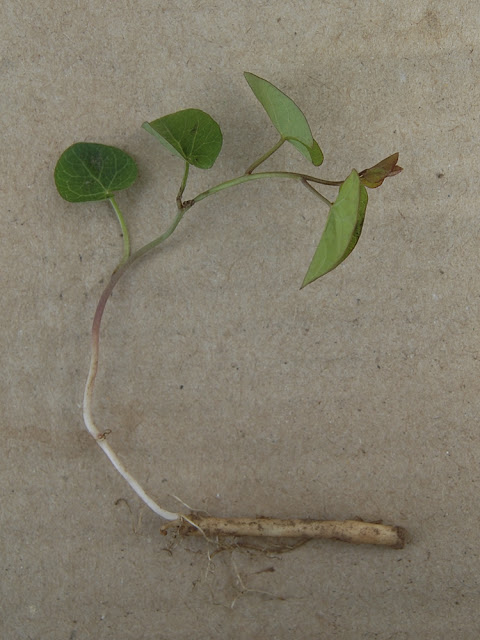 
Emotive creatures foxes. Responsible for the march of the countryside, anti fur fashion campaigns and the enlightened imagination of millions of children captivated by a certain Fantastic Gentlefox. And of course, every city dweller has been woken up by the terrifying sound of foxes at it amongst the bins and had to stop themselves reaching for the phone to dial 999 / 911 / 112 / 000 (yep going international on this blog) in case there is some serious assault happening.  To some, they are furry, cute and cuddly, or perhaps sharp humoured, cheeky and answering to the name Basil. To others, however they are pure vermin. Mauler of rubbish bins, chickens and perfectly planned vegetable arrangements. And always caught on the stealth. So, to snap them sunning it, as my top friend Paula did, will only polarise you all further. Are they lording it or just being a loving family? I'll leave you to judge... 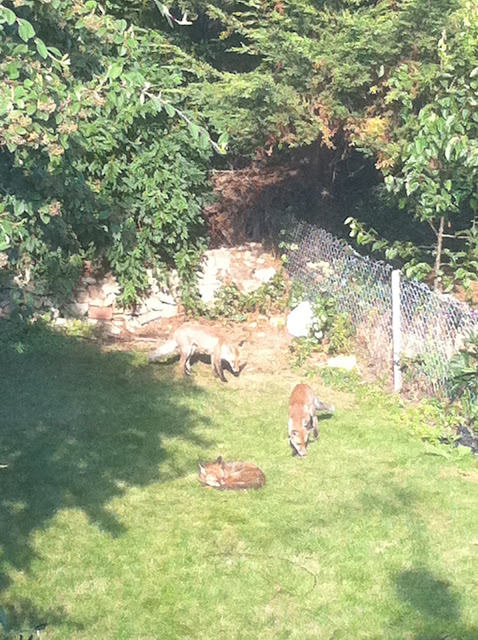 Collector's items
Unfortunately we're talking the type of collection that only the collector understands. Yes, stamp collectors, train spotters, and growers of only one type of flower, you have kindred spirit in ceramic animal enthusiasts (ooo, that sounds very wrong). For the recent converts to growing your own there's a simple way to determine if it is your destiny to become such a collector. Just take my personality test:


You fancy a trip to the garden centre and you head for
a) The small but independent place where gentle folk won’t try the hard sell but will know everything about how to care for alpine plants.
b) That all-you-could-ever-want-in-your-garden behemoth off the M5, that has a pirate ship to leave the kids in whilst you admire the barbeques
c) The slightly off-the-wall place, with an American theme but amaaaazing cakes.
Once at the garden centre you
a)  Head straight for the ‘what to grow now’ and admire the range of seeds from specialist providers
b) Head straight to the summer house display, grabbing a handful of Mr Fothergills as you storm past the seed packets.
c) Head straight for the ceramic animals
Mostly a’s? You’re focused and conscientious but out of touch with modern capitalist society.
Mostly b’s? You thrive on modern capitalist society and those who mock you can do so in envy of (and peering into) your brand new summer house.
Mostly c’s? You probably own one these: 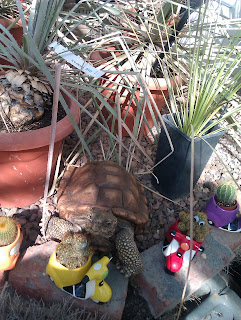 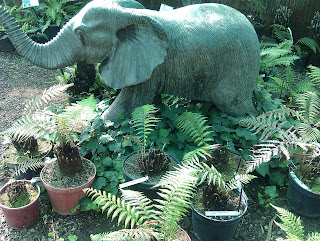 Discovered by Bristol food blogger Sam Evans (@Samfraggle) at the Chief's Trading Post Garden Centre just outside Bristol, here are some examples of taking a Gnome habit to a whole new level. "Why yes, that's an elephant in my garden. I call him Trunks. He's good at keeping the cats out but he's a bugger with the fruit trees, can't leave them alone" Sam has assured me that she goes for the top notch cakes and her boyfriend is passionate about the gardening, meaning that they merely have a passing curiousity in these delights, rather than a trolly full! Do check out Sam's great and ever-growing culinary tour of Bristol, including the rather epic list of foodie havens linked to the recent Gorilla invasion of Brizzle.

Hapless gardener
Bristol
I only feel hapless because some people make it look easy to grow 10 ft marrows or a banquet of greens whereas my courgettes got nabbed by killer slugs and I only got one raspberry. So tips and stories from people less hapless than I are more than welcome. As a disclaimer though, none of my comments should be taken as expert advice on which you can rely! © Unless stated otherwise, and with the exception of guest content where that guest retains copyright, all photos and posts are the copyright of Tom Carpen and may not be used without permission. 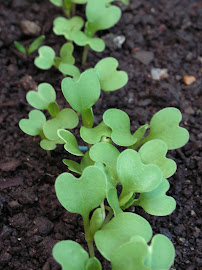 All my posts so far

There are better gardeners, cooks and bloggers out there!